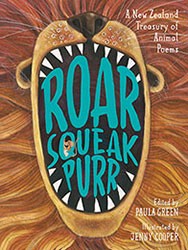 A marvellous menagerie of animal poems for children by New Zealand’s best writers – some of them children – selected by star New Zealand poet Paula Green and adorably illustrated by Jenny Cooper.

In between the covers of this book you will meet creatures large and small. They might pad, or skitter, swoosh or soar. They could be fuzzy, feathery, suckery, scaly or spiky. These animals might ROAR or squeak or Purrrrrrrrrr. Just like the animals they are about, these poems come in all shapes and sizes! They tell stories, pose questions, make us feel things – and they all make glorious music.

If your kids think poetry isn’t for them, Roar Squeak Purr will cure that thought forever! This exuberant treasury brings together over 200 animal poems by New Zealand’s best writers, many of them written by children. The poems were selected and edited by champion poet Paula Green, winner of the Prime Minister’s Award for Poetry and creator of the popular Poetry Box blog, and teamed with Jenny Cooper’s cheeky, whimsical and adorable illustrations.
Roar Squeak Purr is destined to be a family treasure – and to inspire a new generation of poets.