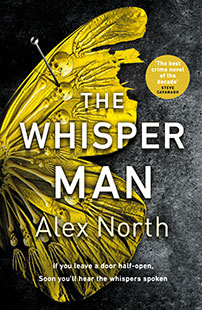 Gripping, moving and brilliantly creepy, this is an outstanding new psychological thriller.

If you leave a door half-open, soon you’ll hear the whispers spoken . . .

Still devastated after the loss of his wife, Tom Kennedy and his young son Jake move to the sleepy village of Featherbank, looking for a fresh start.

But Featherbank has a dark past. Fifteen years earlier a twisted serial killer abducted and murdered five young boys. Until he was finally caught, the killer was known as ‘The Whisper Man’.

Of course, an old crime need not trouble Tom and Jake as they try to settle into their new home. Except that now another boy has gone missing. And then Jake begins acting strangely.

He says he hears a whispering at his window . . .

“Alex North has achieved the seemingly impossible. The Whisper Man is a thriller that is both terrifying and utterly heartbreaking. Mesmerising and masterful ” Mark Billingham