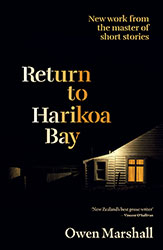 New work from the master of the short story and author of the story ‘Coming Home in the Dark’ made into a major feature film.

‘Whenever I think of coming to punish my father, it’s always in a strong wind, and that’s blowing now as I drive up the long, unsealed track to the house and sheds.’

So begins one of Owen Marshall’s superbly subversive stories. He offers up a wide range of subjects, from untimely deaths to unusual discoveries made about friends or neighbours, from burnishing an overseas trip to a tale about saving a business venture:

‘Just in time,’ said Paddy. ‘I thought I was going to have to resort to giving blow jobs in the office.’ It wasn’t quite as Jane A would have expressed relief, perhaps, but sincere in its own way . . .

With over ten years since his last collection of new stories, Marshall explores his fellow New Zealanders, bringing his wisdom and wry eye to vivid, insightful scenes:

‘Places bring back people, people bring back places, and both conjure the cinema of your past.’