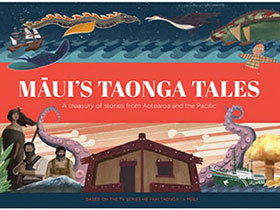 Fully and exclusively written in te reo Māori and aimed at children aged seven to eleven, this book’s lively stories tell the tales of some of the taonga held at Aotearoa New Zealand’s famous national museum, Te Papa, through appealing text and fantastic illustrations.

The book’s pūkōrero, or story teller, is Māui, the great Pacific hero and trickster. The stories are from both long ago and recent times and have been chosen in consultation with Te Papa’s mātauranga Māori curators and the relevant iwi. They range from how Ruhia’s kaitaka, or cloak, saved the life of a young boy and why the band Herbs wrote a song about nuclear testing in the Pacific to Huria Matenga and the Shipwreck, Rata and the Children of Tane, Willie Apiata and the Tough Decision, Hinemoa and Tutanekai, Te Paea and the Ghost Waka, Kahe’s Epic Swim, Heni and the Battle of Gate Pa, Kupe and the Giant Wheke, and Tane and the Kete of Knowledge. Each story is told via illustrations created by young Māori artists; some have illustrated stories from their own iwi. The book is linked to the TV series He Paki Taonga i a Māui, funded by Te Mangai Paho.

The book has evolved out of the forthcoming television series, made by well-known television production company Production Shed. Māui’s Taonga Tales, and the Te Reo edition He Paki Taonga i a Māui has been edited by former Te Papa Senior Writer and He Paki co-producer David Brechin-Smith, and translated into Te Reo Māori by Stephanie Tibble.