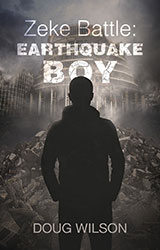 The Ring of Fire, the necklace of earthquakes and volcanoes around the Pacific, from Chile, to California, to Japan and Iran and back to New Zealand has become hugely active. Wellington is Smashed. Can anyone find a way to slow or even stop the cataclysms?

Zeke battle, a homeless and orphan boy has an answer. The unsung genius, at first lorded and then rejected, offers a wildly dramatic solution. He’ll blow up the trigger points for the quakes, drilling deep into the earth to get there. Along with his girlfriend Rosie Moon and his close friend Skitzy Jones, Zeke embarks on a global campaign to fight the Ring of Fire.

Huge global controversy calls him a mad man, risking far more than any climate change scenario. But there are no other options. He drills in Wellington and Chile and Japan. The world holds its breath while wild activists seek to destroy Zeke and his friends. US and Russia take sides.