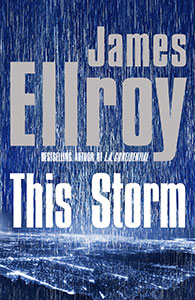 The second novel in Ellroy’s second ‘L.A. Quartet’, which began with the publication of Perfidia in 2014.

It is New Year’s Eve 1941 in Los Angeles, three weeks after the Japanese attack on Pearl Harbour.Police Sergeant Dudley Smith is recuperating after an attempt on his life – stabbed by anunknown assailant in the opium den of a Chinatown restaurant. He has just been given a leave of absence from the Los Angeles Police Department and has been commissioned as a captain in U.S. Army Intelligence. His first posting: Ensenada, Baja California in Mexico – a hotbed of espionage, war profiteering and political intrigue. His job is to incarcerate resident Japanese and foil Fifth Column sabotage. His secret agenda: to exploit his Mexican posting for personal profit.

Back in Los Angeles the murder of a couple of Alien Squad police officers appears to be connected to two events from the 1930s: an unresolved train heist of mint-bound gold bullion – the gold was never recovered; and a fire in Griffith Park that killed thirty-five workers. And of course both events are connected to current Fifth Column activity in Baja California. And it is all inextricably linked to the Los Angeles demimonde of Fifth Columnists and the European exile community, including real-life characters Arnold Schoenberg, Thomas Mann, Otto Kempler, Bertolt Brecht, Kurt Weil and Orson Welles.

Bad men fall in love with strong women; rivals clamber for advantage; driven souls race to solve decade-old crimes and pursue a unified solution to a confluence of events. The price they will pay is high.

Prepare to be engulfed by This Storm.