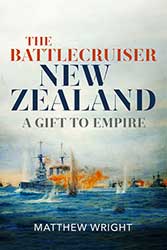 In March 1909 New Zealand’s Premier Joseph Ward offered a ‘first-class battleship of the latest type’ to the British Navy as a contribution to the Empire (and to guard against the perceived threat of a newly rising Japan). Paid for by the people of New Zealand it would enter service in time to fight with distinction in all the major naval battles in the First World War.

Born of the collision between New Zealand’s patriotic dreams and European politics, the tale of HMS New Zealand is further wrapped in issues of engineering, naval strategy and public opinion. Written as part naval history and part ‘biography’ of the vessel and its sailors, The Battlecruiser New Zealand is a fast-paced account of the ship’s career — brought to life through official documents, eyewitness accounts and new research.

Extensively illustrated throughout with black & white and colour photos, plans and paintings, this attractive hardback will appeal to a wide audience, from naval enthusiasts to the general reader of New Zealand history.