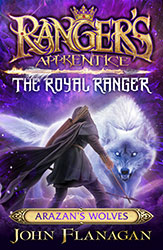 John Flanagan gets spooky in the latest adventure in the New York Times bestselling Ranger’s Apprentice The Royal Ranger series!

Will and Maddie are sent to the neighbouring kingdom of Celtica to investigate reports of terrifying direwolves, an ancient species thought to be extinct. What they discover is even more of a threat – a sorceress who has brought direwolves and Wargals under her control and is building an army of creatures both living and supernatural. Arazan must be stopped before she becomes too powerful – but first Will and Maddie need to find her.

Published in NZ by by Penguin Random House New Zealand